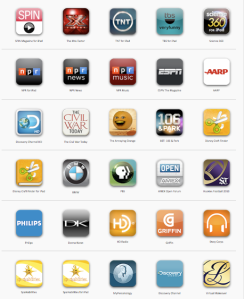 My infatuation with apps extends to app makers – including a company called Bottle Rocket. They are the creative force behind more than 60 top-rated apps for iPhones, iPads and Adroids.

The founder of Bottle Rocket, Calvin Carter, shares some of his wisdom for winning over ‘the toughest crowd’ in the mobile market in this interview with Andrew Warner of Mixergy.com. What I found particularly refreshing was Carter’s attitude on failure and how he links entrepreneurial identity to success.

I was also keen to read about his experience working with different media companies. I’m a huge fan of the iPad app Bottle Rocket created for NPR and was thrilled by Carter’s thoughts on content-driven projects. An excerpt:

“To be able to work with amazing brands that have amazing content is so rewarding.

It’s so much more fun for us as designers and architects and developers to work with something that is exciting and interesting content, because at the end of the day, content a lot of times is really where the power is. Taking NPR, for example, what would I rather work with, a local radio station or a national public radio? Regardless of the number of individuals that are listening–it’s like 26 million regular listeners to NPR–it’s also the content. The content is great content. It’s much more rewarding to do that. So it’s really not necessarily about how much is this person going to pay me to produce the work.”

Couldn’t agree more. Check it out for yourself here (NPR app)… and drop by the Bottle Rocket blog to catch up on app trends, including these gems from the end of 2011: